Don’t you love it when you have leftover produce and you get to figure out what to do with it, coming up with (you hope) some delicious new dish or dessert?  I do.  It makes us think creatively, and in the kitchen, that’s important.  Sometimes we forget to try new things, making the same old thing over and over.  That’s fine most of the time, if it’s something really good.  There’s no need to reinvent the wheel, necessarily, but do change things up a bit sometimes so no one gets bored!  Also, it’s important to be economical, and wasting food is a huge problem in our country.  Use it, don’t lose it. 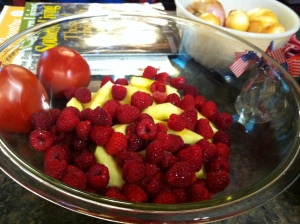 Yesterday I did have some extra produce: two and a half cups of fresh raspberries and about five apples. I thought it would  be nice to put them together in  a pie or a cobbler.  I decided to pull out Granddaddy’s 8″ cast iron skillet and put together a cobbler, since I was cooking so many other things that my hands and countertop were too full to roll out a piecrust.   Here’s what I did:

5 or 6 apples, peeled and sliced

2 cups (or however much you have handy) raspberries

Place the butter in 8″ skillet and place in a preheated 350 degrees F oven.  Allow butter to melt while you assemble other ingredients, but don’t allow it to burn

In another mixing bowl, whisk together flour, granulated sugar, baking powder, and salt.  Add milk and 1 tsp vanilla extract, and stir to combine.

Pour the batter into the skillet containing melted butter.  Top with the coated fruit.  Do not stir.

Bake for 45 minutes to one hour (until brown on top and batter in center is no longer gooey.)

To make a “patriotic cobbler,”  add some blackberries or blueberries to the fruit mixture!  I’d have done that myself, but didn’t have any on hand.

The cobbler tasted great; the raspberries gave a surprising burst of tang to each bite of apple, which made it more special than if I’d omitted them.  We enjoyed it!   I hope you do, too. 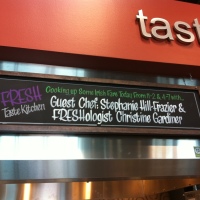