Northwest Florida is where I was raised; it’s a gorgeous coastal place to live with warm, Southern people and customs, and happy transplants from northern states and Canada, who quickly become friends. After all, aren’t they so complimentary of us to choose our lovely home for their vacation spot or second home? I think so.

Well, as you’ve heard, there was an unwelcome, unmerciful, completely terrible visitor to our lovely state recently: a hurricane named Michael.

Michael, according to Wikipedia, originated from a broad low-pressure area that formed in the southwestern Caribbean Sea on October 2. It gained strength and eventually made landfall on the gulf coast of NWFL on October 10, where it managed to destroy homes, businesses, vehicles, and seemingly unending acres of trees. What wasn’t destroyed was damaged. Several lives were lost. It was horrible. It’s still horrible.

But I’m not going to focus on that right now. I’m going to share with you some of the silver linings, the warmth of neighbors, and the strength of the human spirit.

First, my dad was trying to ride out the storm in his car out in the yard (!), thinking that if he needed to flee, he could. Only issue is, he couldn’t. Bridges were closed, the wind was so strong, and conditions deteriorated rapidly. It was dangerous and he was terrified. Our next door neighbor, whom we’ve known since 1978, was looking out the window of their house, and saw dad sitting in his car.

“Mr. Bob’s over there in his car,” Robbie said, and he ran to his truck, drove over to dad’s and made him get in. He took him back over to their sturdy home, where they hunkered down together, experiencing the scariest thing, dad says, he’s ever been through. Thank God for caring neighbors!

The next morning, as I desperately tried to reach my 88-year-old dad on his cell phone and his landline (both unusable after the storm) some men from the church around the corner, where we grew up, came by to check on him, and moved things out of the yard as much as they could so he’d have a path in and out of his house. One of those men checked on him each morning until we were allowed into the area, several days later, bringing him hot coffee and breakfast, courtesy of the ladies of the church. In the evening, he’d bring dad a plate of dinner that The Red Cross had delivered to the church for anyone who needed to eat.

Then as we arrived and drove through the National Guard checkpoints, designed to keep out looters and lookie-loos who might get hurt, we began to see the damage. It was truly heartbreaking. But again, looking at the helpers, as Mr. Rogers said his mom told him to do in scary situations, was encouraging. We saw utility crews from all over the southeast, helping to right the downed power poles and restring the lines. We saw The Red Cross, Samaritan’s Purse, and other organizations feeding and clothing those who found themselves suddenly without those things. There were police officers from all over, too, enforcing curfew (again, due to looters) and helping people whenever they could.

One afternoon, a food truck rolled up to our church, and set up a tent in the grass out front. They pulled out fish cookers where they fried up catfish after catfish, and they had giant vats of spicy, flavorful jambalaya which they were dishing up to all us tired, hungry folks. Y’all, it was the best I’ve ever had. The folks who were cooking wouldn’t let us give them one cent as a donation for the food, either.

“It’s all been donated from some folks in Tallahassee who want to help you,” was all they’d say. So kind.

That jambalaya was scrumptious. Warm, spicy, full of tender shrimp, spicy sausage, and juicy chicken. I told myself that I’d have to learn to make it when I returned.

The kindness of neighbors, strangers, church members, utility workers, acquaintances, and so many others…that is the kind of love that God wants from us, according to the scriptures. Not looking out for one’s own interest only, but also for the interests of others. That’s what I saw at every turn, on every block, in so many yards or inside the businesses and churches that managed to safely open their doors. Loving one another. That’s what is happening in Northwest Florida right now. 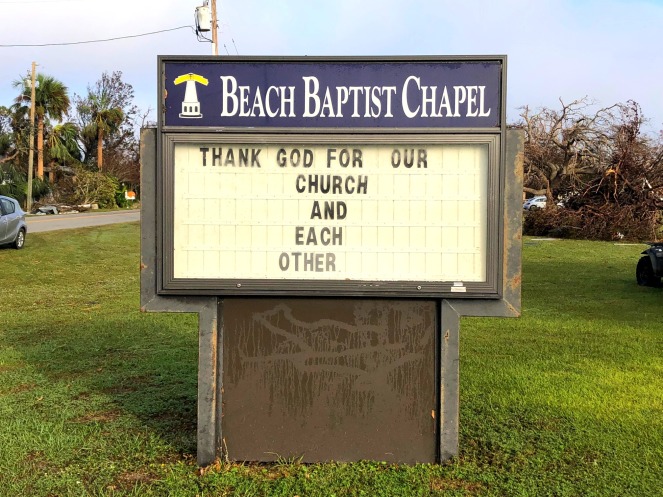 So, I ran out of PTO days at work and came on back to Texas. I’ve been working on my father’s behalf behind the scenes, on my computer, helping him get signed up with FEMA, keeping  him updated on places in town that have reopened, the shifting times of curfew, that kind of thing.

But my heart is still there. I wish I were still helping my dad and our neighbors clean up. Since I can’t, I will simply remind you to please keep Northwest Florida in your prayers. Don’t forget that just because their story isn’t interesting to the national news media anymore doesn’t mean that they aren’t still standing there, staring down great piles of lumber, glass, broken toys, splintered furniture, mildew-covered clothing and bedding, trying to figure out what the heck to do next. That’s where they are right now. Even with the help that’s been given, there is suffering. Someone asked in a Facebook group last night if anyone had any water they could have. That’s a pretty basic need, and it’s real.

Thank you for keeping them in your prayers and your thoughts. If you’d like to donate to help them, my high school classmate Trish has a foundation that was established by her parents years ago. They are taking donations and making grants to locals who need help and groups who are helping others. Click here to learn about the foundation and how to donate.  You can also call 850-227-1111 to speak to someone at the foundation.

Thanks, friends. I’ll share the recipe for the jambalaya I made with you tomorrow. It was so delicious and I think you’ll enjoy it. 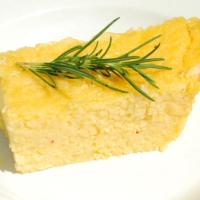