I learned something interesting today; brownies, those fudgy, chewy cake-like confections that we all love, were invented at the request of a woman and FOR women at the Columbian Exposition in Chicago in the year 1893, according to Wikipedia and other sources.  The original recipe was requested so that there would be a small dessert in the ladies’ boxed lunches at the Expo that would be easy to pick up and eat.  Thank you, Bertha Palmer, for making that request!

The original brownies that were made per Mrs. Palmer’s request included walnuts and an apricot glaze, and are apparently still served at the Palmer House Hotel using that original recipe.  I think that combination must be delicious!  I like almost anything in a brownie.  How about you?

On that note, check out these lovelies: 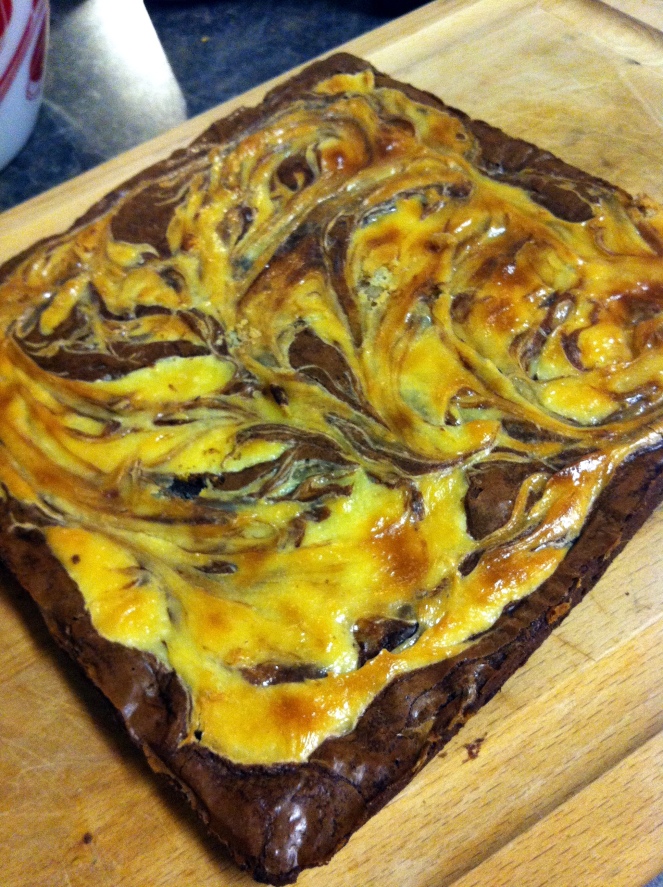 They’re cheesecake brownies, and are made using a recipe that David Lebovitz shared on his food blog, called David Leibovitz: Living the Sweet Life In Paris.  I love David’s blog; very lovely and inspiring.  He has a few cookbooks under his belt, too.  Check him out sometime.  In the meantime, you can try out one of his recipes.  I made it myself this morning on KLTV. (Here’s a link to the video of the segment: In the Kitchen with Mama Steph video segment.)

The topping on these cheesecake brownies was so good that I considered getting a spoon and just having a bowlful of it. 🙂 It tasted exactly like a good cheesecake. I restrained myself, though, and completed the recipe.  It’s not a difficult recipe, and it doesn’t require unusual ingredients, so I think you’ll enjoy making them. (Complicated recipes aren’t fun for  most of us, right?) 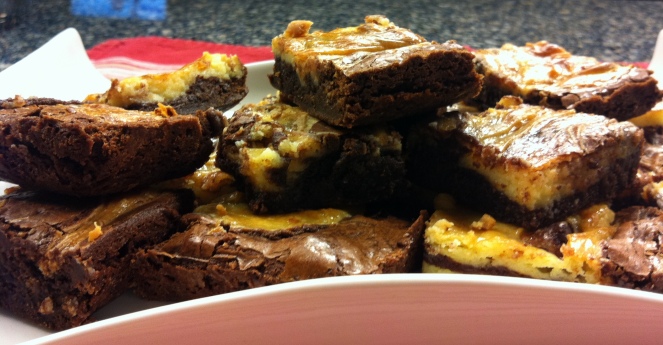 They bake up chewy and moist, which is perfect, in my opinion.  Here’s the recipe:

From the Book Ready For Dessert by David Lebovitz

1. Line a 9-inch  or 8-inch  square pan with foil, making sure it goes up all four sides. Use two sheets if necessary. Mist with non-stick spray or grease lightly.

3. In a medium saucepan, melt the butter and chocolate over low heat, stirring until smooth. Remove from heat and beat in the 2/3 cup sugar, then the eggs.

4. Mix in the flour, cocoa powder and salt, then the vanilla and chocolate chips. Spread evenly in the prepared pan.

5. In a separate bowl, beat together the cream cheese, the yolk, 5 tablespoons of sugar, and vanilla until smooth.

7. Bake for 35 to 40 minutes, or until the batter in the center of the pan feels just set.

Let cool, then lift out the foil and peel it away. Cut the brownies into squares.

As always, the hardest part of this recipe is waiting for the brownies to cool before cutting them! If you can manage, though, they look beautiful on the plate, and are nice enough to serve to guests.  Enjoy!

P.S. Don’t forget to go to the video page I linked up earlier and *leave a comment there* to be entered to win the adorable watermelon measuring cups!  (contest now closed….thanks!) Good luck!